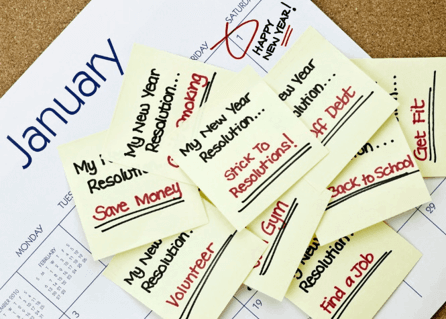 A Resolution for the Greater Good = A Better Company

It’s a new year and a new decade and that means that all your New Year’s resolutions are likely well underway! Whether you have vowed to lose weight, live cleaner, or save more money, chances are that your carefully selected resolutions were chosen to better yourself. Cultures across the globe make strides to better themselves physically, mentally and emotionally every year, though only a small percentage keeps their New Year’s resolutions. Why is that?

Well, let’s start with asking how the “New Year’s resolution” came to be. Did you know that the tradition was originally rooted in religious practices and can be traced all the way back to Babylon over 4,000 years ago?! The Ancient Babylonians celebrated their New Year in March based on the start of the crop season. The ritual continued for another 2,000 years before landing in the Roman Empire, where January 1st was established as the start of the New Year (named for the god, Janus who looked to the past and the future). Many ancient resolutions would include promises or offerings (even sacrifices) to the gods to substantiate their resolutions in return for good fortune and a favorable crop season. The jump to the Western world was still reflective of many of these same ideas (minus the sacrifices) but with the idea of focusing on poor habits and making efforts to improve upon them within the church and community. While we no longer use our resolutions to pay homage to the gods in return for survival, the continuing tradition is still close to its origins.

Perhaps the old-world cultures were on to something. It seems that resolutions have gone from benefitting the greater good of the village or congregation to focusing on personal improvement. However, studies have shown that it is easier to make a long-lasting change if someone or something else is relying on you to maintain it.

If you are a business owner, consider starting a companywide New Year’s resolution. So many of the companies that JGL works with have taken major strides over the past several years to be more sustainable, purchase local, and give back to the community. These initiatives may have started as a simple idea, or resolution if you will, but they have the power to make a very pronounced difference. This line of thinking is becoming a sought-after proposed value-add. Many JGL clients look for these types of efforts when choosing a partner.

JGL’s 2020 resolution is for each team member to be a part of at least one community service project a year. We are hoping that sacrificing a little bit of our personal time will result in the gods offering bountiful crops to our friends in the food service industry!

There’s no time like the present to start a resolution- or expand on the great initiatives you already have! Be the change you want to be and make 2020 the best year yet!