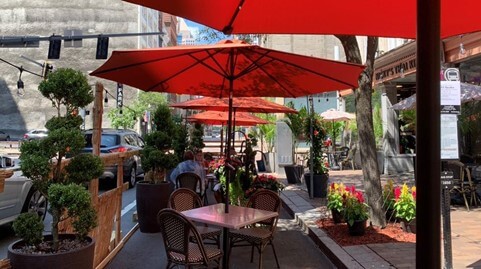 The COVID Response from the Pittsburgh Service Industry

With all that has been going on over the past few months, one thing is clear; everything is dependent on how you respond to the pandemic. That remains true for the countless bars and restaurants across the U.S., including right here in my hometown of Pittsburgh, PA. Like many cities, the local restaurants have been rethinking their model in order to stay afloat. Many of them have been compliant with the restrictions put in place, and many have not. Some have adopted a new normal, some have been shut down by the Health Department, and some have permanently closed. But it was what I saw the community doing as a whole that caught my eye.

It has honestly been both exciting and humbling to see so many of Pittsburgh’s best and brightest restaurateurs reevaluating, re-imagining, rebranding and truly reinventing their restaurants in order to remain open through the COVID crisis. Restructuring existing service models quickly became a collective effort with social media groups and virtual group calls of local restaurant leaders popping up all over the place. This became an easy and ongoing way to share ideas, best practices, updates, and most importantly accountability. There were consistent asks from these groups to other restaurants to follow state and county restrictions to protect the Pittsburgh community as a whole. It became very clear that a majority of our restaurants were genuinely putting in the effort to keep their staff and patrons safe.

In addition to the individual efforts I’ve seen, such as those listed above, groups like Safe Service Allegheny have also been established. Safe Service Allegheny is a collaborative partnership effort between the Pennsylvania Restaurant & Lodging Association, Allegheny County Health Department and the service-industry led Safe Service PGH and has become an invaluable resource for restaurants. This alliance has reinforced a positive approach to following guidelines (in opposition to other coalitions that have formed to openly defy the Governor’s orders). Pittsburgh has seen a definitive decrease in bar and restaurant-contracted cases over the past several weeks according to the Health Department.

All of these outlets I have mentioned; social media, Safe Service Allegheny, the Health Department, plus frequently published media such as Pittsburgh Magazine and local news, have really become the bridge between restaurants and their patrons. The heightened awareness of public information on which establishments are following safety restrictions and which are not, is vital to how Pittsburgh is dining. While it has been difficult at times to serve Pittsburghers safely, and in return, support our restaurants when they need it most, I hope to continue to see this genuine concern for public safety and mutual respect from the restaurant industry continue long beyond the days of COVID-19. I can’t speak highly enough of this industry that shaped me. I have immense respect for those who are putting their health at risk in order to continue to serve this community safely and simply keep their jobs and/or keep their doors open. So whether you are a fellow Pittsburgher or you live far away from the city of bridges, please support your local restaurants and make sure you are doing as much to protect them as they are doing to protect you- because if it’s anything like the Burgh, they’re doing everything they can… and then some.